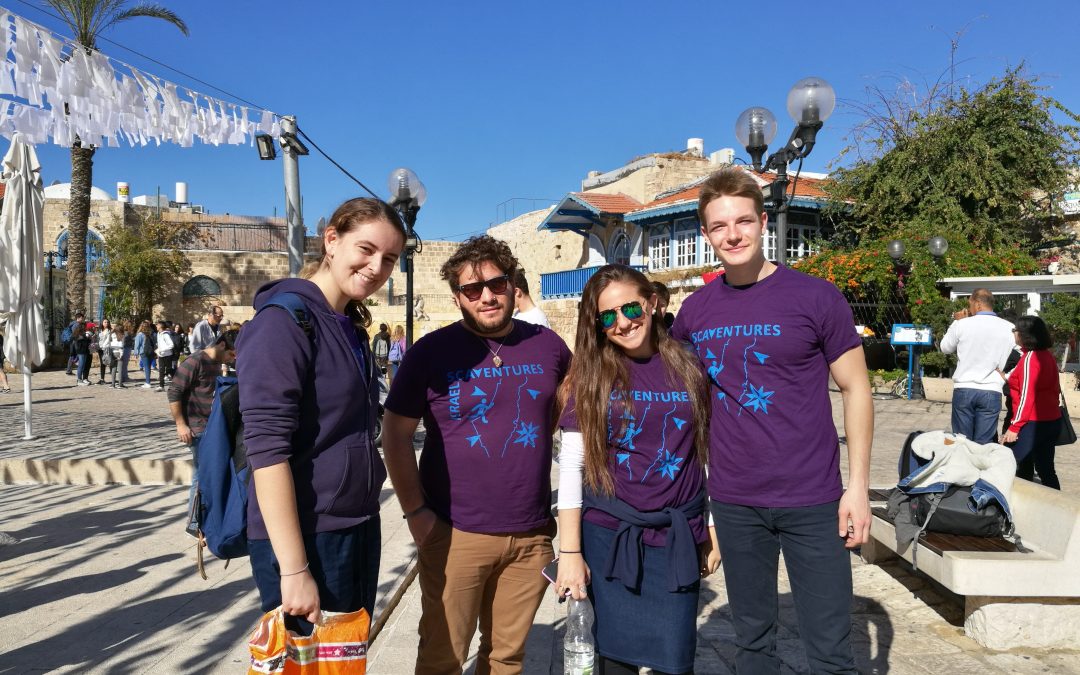 Discover Jerusalem’s 25 (un)familiar facts through the lenses of a young Jew absorbed by the city’s environment and people.

My name is Dimitrije Savić and I come from Belgrade, Serbia. I’m interning in IsraelScaventures, in Jerusalem, and was assigned an exciting and meaningful task to learn and write about the city where everything started, where ancient civilizations left their marks, where my ancestors lived and died, and where peace, according to the prophecies, shall come upon all of us. Rather than writing about Jerusalem’s common features and sites, I decided to write about 25 facts and places that are perhaps not that familiar but nevertheless are important parts of the daily life and history of the city. 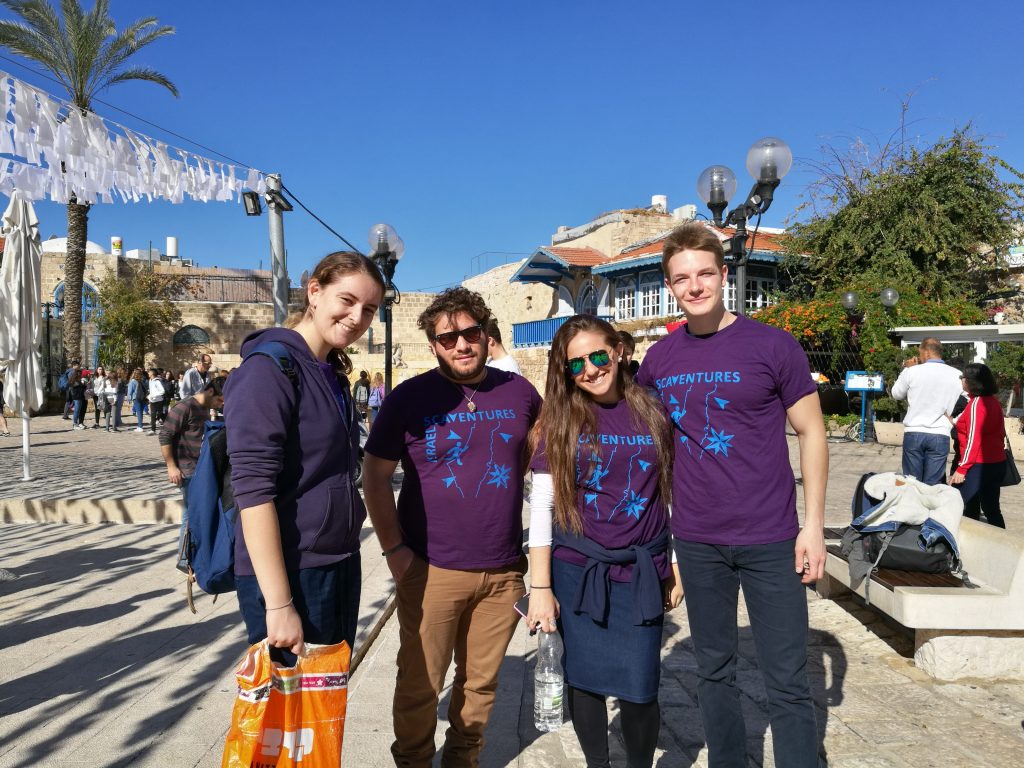 Here is me with other ScaVentures staff, I’m first on the right.

Writing a blog about Jerusalem, a cradle of culture and history, is not an easy task. Researching about one thing may lead to dozens of other amusing things and it can make the writer feel lost and uncertain about what to include next because there is so much to write about, fascinating facts just appearing out of nowhere. I felt like everything is waiting to be discovered by this curious and inexperienced head of mine.
So where to start from? Being pretty new to the Holy city, I was naturally overwhelmed with the surrounding and with the endless possibilities to research and learn. So I said to myself  ‘start from what is around you’.
The following posts aim to provide you with short and most important bits of information about Jerusalem’s known and not-so-known gems with a personal touch to them and my motivations for writing. Discover Jerusalem through the lenses of a young Jew absorbed by the city’s ancient streets and pavements, its people, diversity and culture.

#1: Jerusalem Stone –
Being surrounded by the bright, sandy stones made me start researching about their origin and significance to the city of Jerusalem. Metaphorically, it is the foundation of the upcoming writings, as it has been the foundation of the city for thousands of years.
The Jerusalem stone is a sturdy, beautiful type of stone found just beneath the hills and mountains of Jerusalem and its surrounding area. The stone has been a symbol of Jerusalem probably for as long as the city exists. In fact, it is currently so valuable and appreciated that the current law in Jerusalem states that all constructions must be built from it. Also, it is the reason why the city got stuck with the flattering epithet “Jerusalem of Gold” – it is enough to look at the walls of Jerusalem during sunrise or sunset to realize why. Simply stunning! 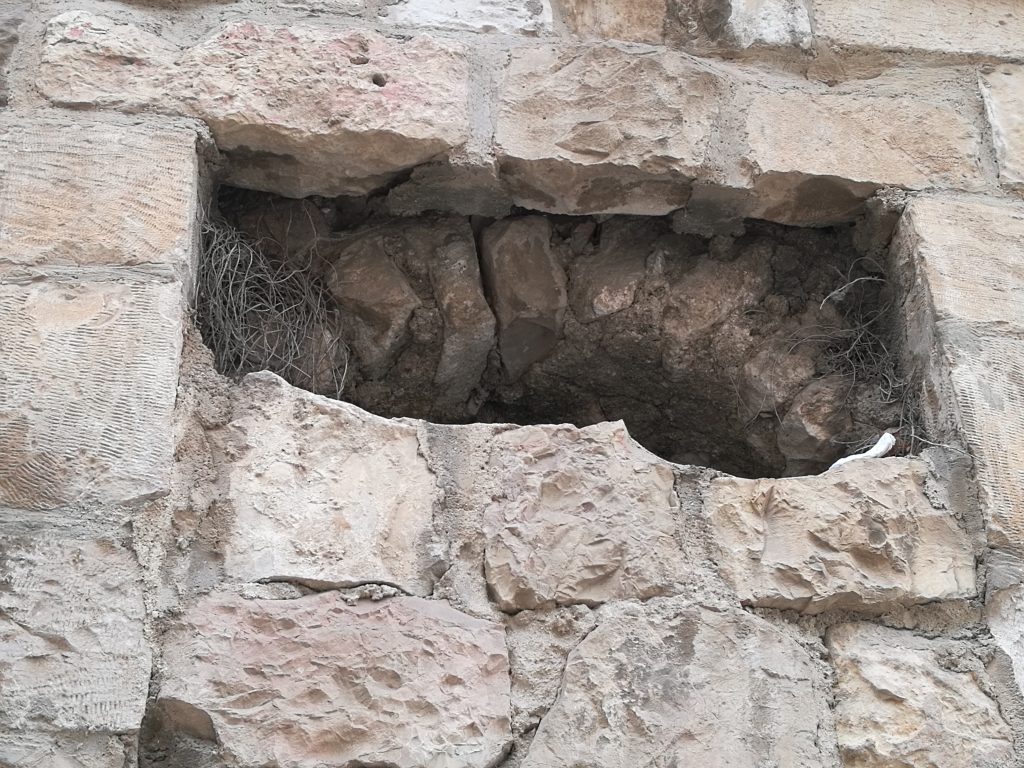 #2: Cats –
These agile fellas have been part of the daily lives of Jerusalem’s residents for a long time now. They’ve been regular visitors at my place so I became their regular food provider, as many other residents had. Aside from providing food, many people dedicate their time and money to protect the cute and grumpy creatures which were brought by the British in the 1930s as the solution to the vermin problem the city had. Nowadays, the vermin are hard to find on the streets of Jerusalem and the cats have become a usual sight on the streets. 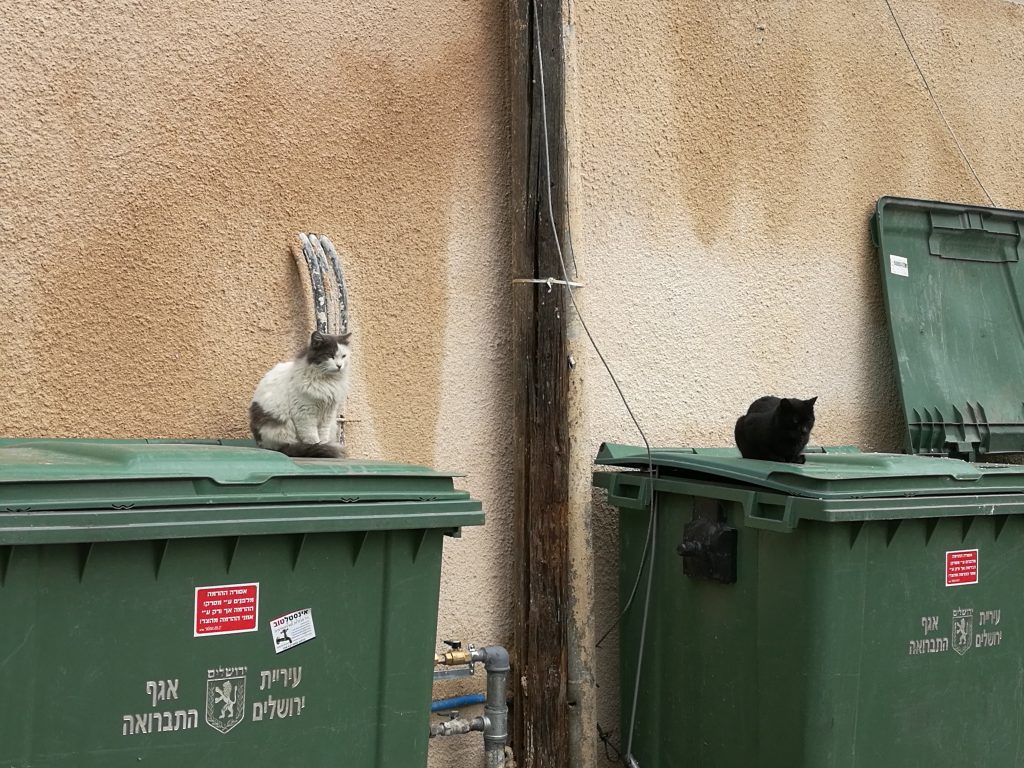 #3: Nachman MeUman –
Balconies, bumper stickers, graffiti, scaffolding – the נַ נַחְ נַחְמָ נַחְמָן מְאוּמַן (Na Nach Nachma Nachman MeUman) phrase can be seen all around Israel. Its frequency and anomaly have intrigued me enough to discover what it’s all about.
Rabbi Nachman of Breslov (1772-1810) was a founder of the Breslov movement, Chasidic master and an amazing Kabbalah practitioner. In 1922 one of Nachman’s followers claimed to have received a note from Nachman which was signed with Na Nach Nachma Nachman MeUman. Ever since, there is a dispute between Breslover Hasidim about the credibility of the story. Those who believe in the story have formed a subgroup called Na Nach using the whole Na Nach phrase as a song and wearing distinctive large, white kippahs with the Na Nach phrase on them.
The story has more details to it and I recommend reading it. Just type Na Nach on the Internet choose your source. 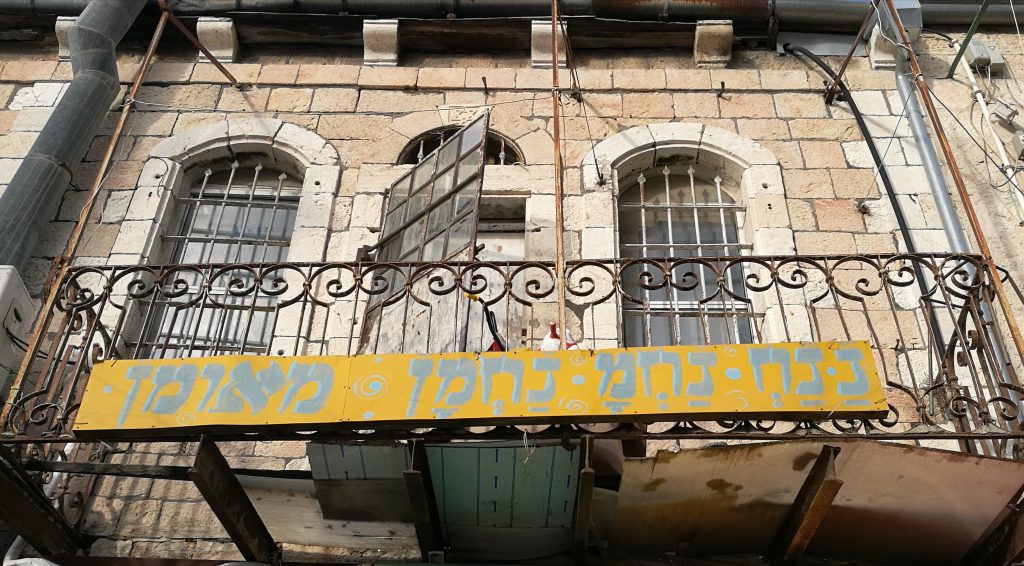 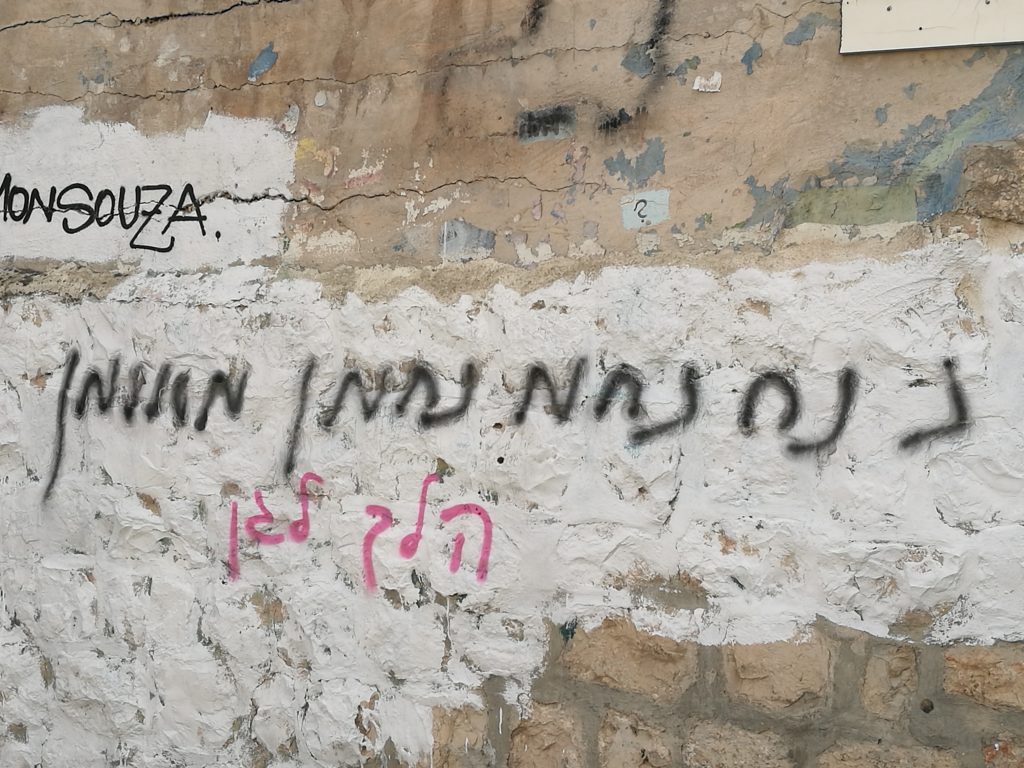 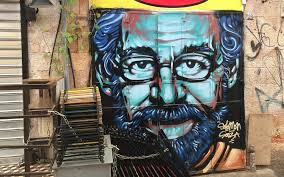 This young British-Israeli artist has attracted lots of attention lately by – painting shop metal shutters. Since 2015, Souza and his friend and the mastermind of the idea Berel Hahn have been working on this project which the public and shop owners have openhandedly accepted and supported. The market shutters painted by Souza have given life to the “Shuk” (Hebrew for market) even at night. Walking through the narrow passages of the Shuk and looking at the magnificent pieces of art painted by Souza is like walking through an outdoor contemporary museum at night. The paintings depict Biblical figures and motives, sheiks, scientists, rabbis, singers, politicians, intellectuals, writers, freedom fighters… A really unique experience and site, and a must-do in Jerusalem. The project is still on – so far, more than 150 shutters have been painted.

#5: Souza on Bezalel Street –
Instead of focusing on the pieces Souza is most famous for, mainly those on the Shuk, I decided to focus on two rather distinctive pieces of work which, as I’d found out unfortunately, not many people in Jerusalem know about.   I have the privilege of waiting for one looong traffic light to cross the Bezalel str every single morning. The privilege is there only because of the remarkable artwork located in front of me, above the buildings. Of course, inquiry followed, and Solomon was kind enough to give the background info about them.

As he said, the bearded old man with the word Kadesh (Hebr קדש, meaning Sacred, Holy) inscribed on a parchment of a fabric on his forehead, is Kohen Gadol, “the spiritual leader of Israel, an icon of the old kingdom and times when we build connection with a force higher than our physical presence on this planet. The artwork truly awakes a sense of awe and spirituality”.

A couple of buildings down Bezalel str there is a Menorah painting on one of the upper walls of the building. This painting has a particularly symbolic meaning. Bezalel, chosen by God, was the chief designer and builder of instruments used in the tabernacle. The image of Menorah, which Bezalel created according to God’s description, tries to depict the story and is a “symbol the people of Israel have carried thousands of years, keeping the lights of their culture burning bright”. 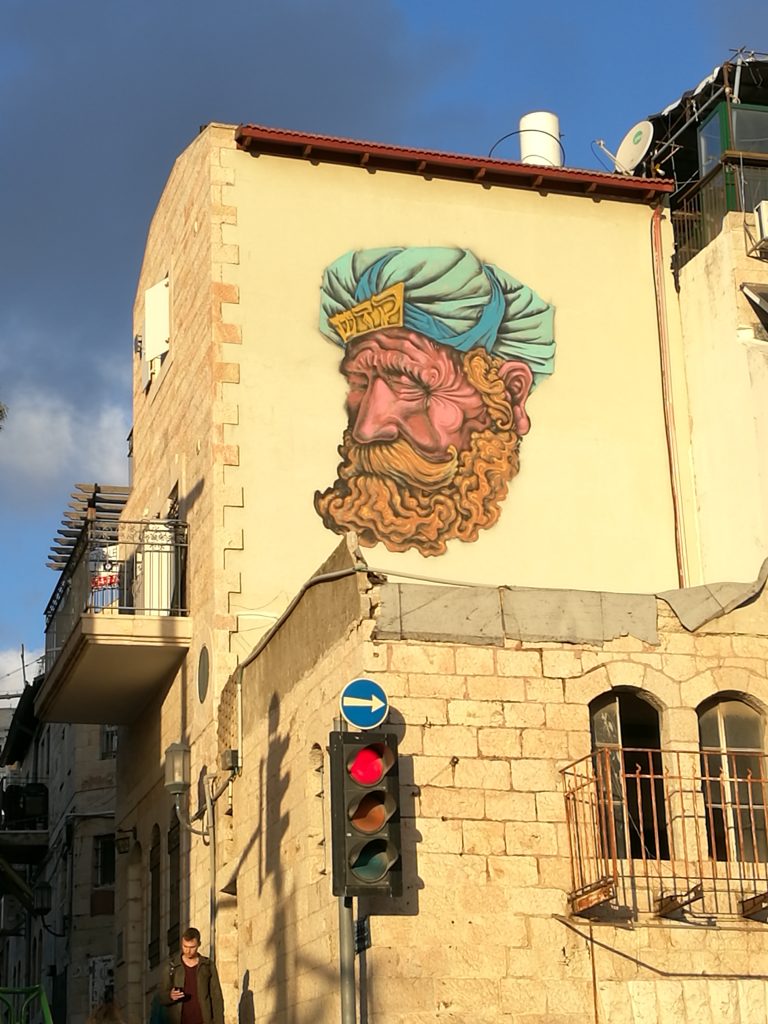 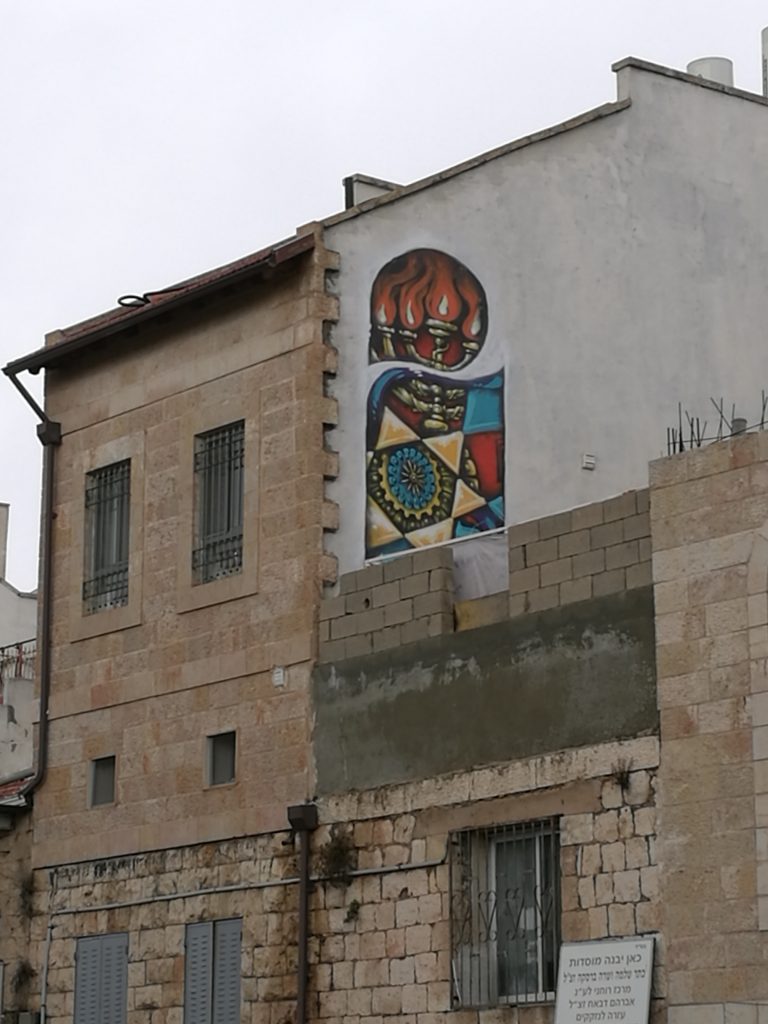 I encourage you to have a look at these magnificent art pieces located near Gan Sacher, Nahlaot neighbourhood and the Shuk!

Check back next week Thursday for part 2 – more (Un)Familiar Facts About Jerusalem!