On an Israel ScaVenture, with maps and mission packs in hand, you will navigate your way through streets, alleys and markets, engaging with the story of Israel and its people. Our Israel ScaVentures take the form of Scavenger Hunts or Dashes – they are great for groups of all sizes, with varying background and knowledge. We like to think of our games as a cross between a scavenger hunt and adventure of discovery – that’s why we call them ScaVentures! 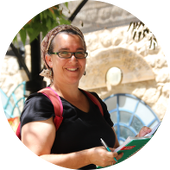 An experienced teacher and informal educator, Tali has developed curriculum,teacher guides, educational websites and experiential programs. Today she develops Israel ScaVenture routes, trains and manages a team of more than 20 guides and oversees scavenger hunt programs for groups of all sizes and types. Tali made her way from Cape Town, South Africa to Israel. She is wife to Daniel and mother to Ayelet, Eliana, Na’ama and Shai.  E-mail: tali@israelscaventures.com 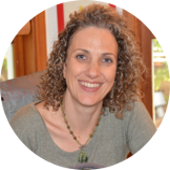 A vibrant and passionate individual, Lisa is in charge of managing and growing relationships with our tour operator partners. Lisa has a diverse number of interests and hobbies which she effectively balances and enjoys. Lisa’s dynamic personality and creative problem-solving abilities make her an invaluable asset to the Israel ScaVenture team! E-mail: lisa@israelscaventures.com 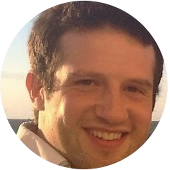 Dovi is our energetic and friendly project manager who educates and inspires not only our participants but also the Israel ScaVenture team. Dovi managers various tour routes and acts as a leader and mentor to other guides. Dovi’s enthusiasm is evident not only in his dedication to the business but also to his volunteer work and Yeshiva learning which make him a unique advocate for the pursuit of Jewish values. E-mail: dovi@israelscaventures.com

Having served as a commander in an elite IDF unit, Yom Tov has the experience to manage teams, devise strategies and see projects through to successful completion.  Completing a degree in psychology and economics, Yom Tov brings his diverse interests and knowledge to the ScaVentures team.  Yom Tov love working at Israel ScaVentures because he considers life to be an awesome scavenger hunt! E-mail: yomtov@israelscaventures.com

Meet Some of Our Madrichim!

On Thursday morning, April 5, First Station hosted the launch of “ScaVentures Jerusalem, the Experiential Guidebook.” Tali Kaplinski Tarlow, author and founder of Scaventures, along with family and friends, were on hand to not only sell the new volume, which features Jerusalem’s most famous neighborhoods, but introduce the newest Train Game.    See here for more.

Mastering the art of reinventing yourself

Jerusalem Post: “There’s something about Israel that encourages you to reinvent yourself.  There don’t seem to be rules of how to live, and I love that I can be creative with my life.” Click here to read more about our Founder and Director Tali Kaplinski Tarlow. 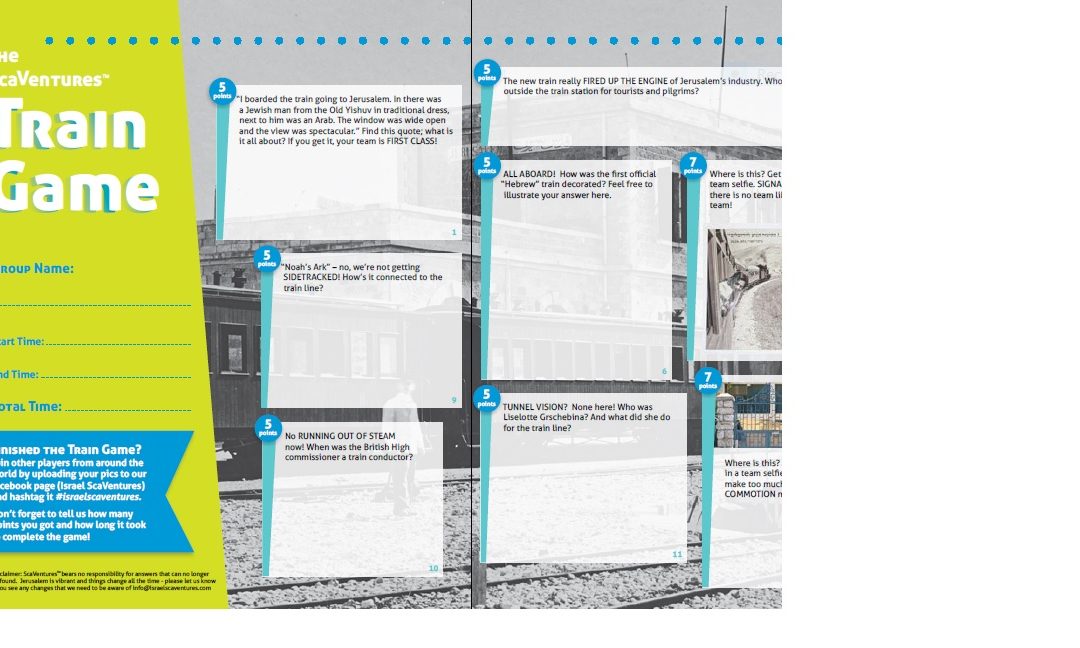 We hope you had  great time on the ScaVentures(TM) Train Game!  Jerusalem is vibrant and things change all the time – please tell us  if you see any changes that we need to be aware of!  Disclaimer: Israel ScaVentures bears no responsibility for answers that can no longer be found.   Did you enjoy the ScaVentures (TM) Train Game?  Join us on many more ScaVentures – for more information be in touch!

1. Ques: I boarded the train going to Jerusalem. In it there was a Jewish man from the Old Yishuv in traditional dress, next to him was an Arab. The window was wide open and the view was spectacular.” Find this quote: what is it all about? If you get it, your team is FIRST CLASS!

1. Ans: Found on a sign along the Tracks Trail, this describes a cross culture encounter where a Jew and an Arab sit happily together enjoying the train ride and the wonderful day.

2. Ques: The new train really FIRED UP THE ENGINE of Jerusalem’s industry. Who waited outside the train station for tourists and pilgrims?

2. Ans: Found on a sign along the Tracks Trail, near the parking lot, carriage drivers would wait outside the train station for tourists and pilgrims, eager to take them to their destination.

3. Ques: You’re on the right TRACK! Take a team selfie by a semaphore. And what is a semaphore anyway?

3. Ans: A semaphore is a mechanical signaling system based on movable arms that signal information to train drivers.  The old semaphore is at the entrance to the Tracks Trail by the parking lot.

4. Ques: Riots and bloodshed in pre-state Israel in the 1930’s: a train on the Jerusalem line is ambushed and overturned! Find a picture of the train and take an “investigative” team selfie. We won’t BLOW THE WHISTLE on you!

4. Ans: Found on a sign on the Tracks Trail is a picture of the overturned locomotive.

5. Ques: Where is this? Get it in a team selfie. You’ve taken this game to the NEXT PLATFORM!

5. Ans: Found on one of the quotation signs along the Tracks Trail.

6. Ques: ALL ABOARD! How was the first official “Hebrew” train decorated?

6. Ans: Found on a sign on the Tracks Trail. The first Hebrew train was decorated with Israeli flags.  A picture of this can be seen on page 90 of ScaVentures Jerusalem.

7. Ques: Where is this? Get it in a team selfie. SIGNAL that there is no team like your team!

7. Ans: Found at the end of the route of the Train Game, on the Tracks Trail at the junction of Pierre Koneig Street.

8. Ques: CONDUCT YOURSELVES with pride when you discover who were the two famous travelers on the train it its early years!

8: Ans: Found on a sign in the First Station area, Theodore Herzl and Kaiser Wilhem II were famous travelers on the train line.

9. Ques: “Noah’s Ark” – No, we’re not getting SIDETRACKED! How is it connected to the train line?

9. Ans: Found on a sign along the Tracks Trail, it was a movable British Defense position at the end of the train.

10. Ques: No RUNNING OUT OF STEAM now! When was the British High Commissioner a train conductor?

10. Ans: Found on a sign in the First Station area, the British High Commissioner was the conductor on the first train that entered the Jerusalem Train Station under British Mandate Rule.

11. Ques: TUNNEL VISION?   None here!  Who was Lisolette Grschebina? And what did she do for the train line?

11. Ans: Found on a sign along the Tracks Trail, she was a German Jewish photographer who was forced to leave Germany. She made an exhibition on the train in the 1940s.

12. Ques: Where is this? Get it in a team selfie. Don’t make too much of a COMMOTION now!

12: Ans: This gate can be found along the Tracks Trail.

13. Ans: The Train Clock, made from recycled metal from the train tracks is mounted on the main building above the main entrance to the train station.

14. Ques: Where is this? Get it in a team selfie. EXPRESS your team awesomeness!

14. Ans: The words Jerusalem in Hebrew, English and Arabic are on a plaque on the top of the train station. Along the side of the station there are stairs that will take you there.

15. Ques: Today you CHOO- CHOO- CHOOSE to be winners! What company was established right next to the train station?

15. Ans: Along the Tracks Trail, near the parking is the first power station in Jerusalem.

16. Ques: END OF THE LINE BONUS QUESTION: While we’re on this TRAIN OF THOUGHT, find carriage #322. On it is a small steel plate that has the ID number, year of manufacture, and the letters “PR”. What does PR stand for? What info can you learn from this plaque? You can Google it, ask someone or do anything creative and legal to find an answer. 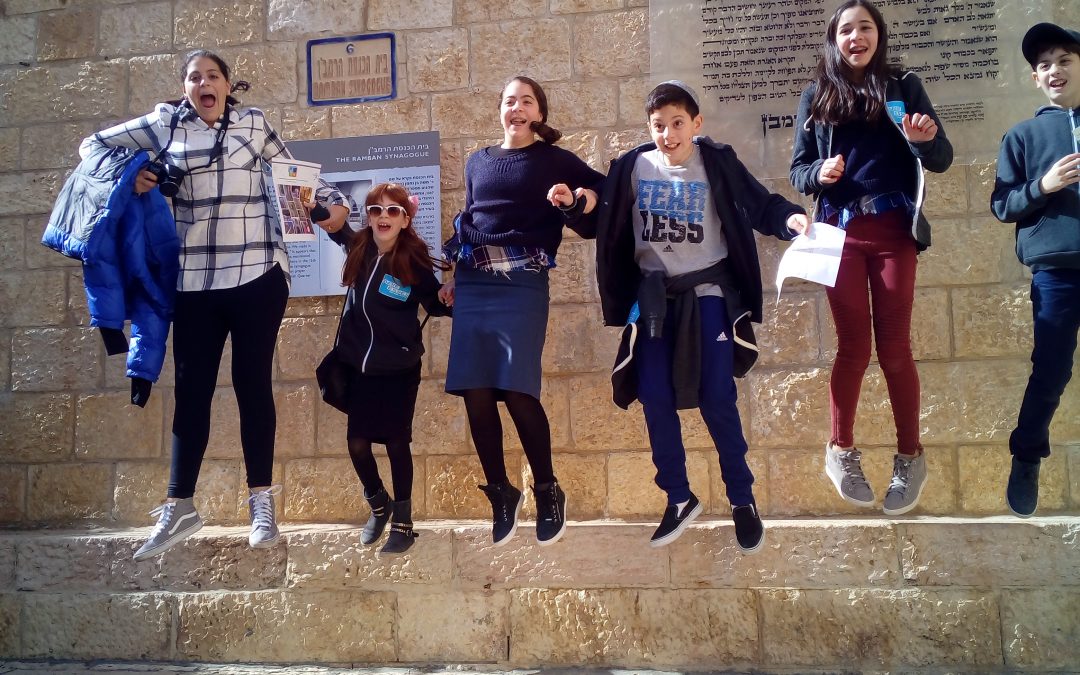 Over Thanksgiving, Chanukah, December and Yeshiva vacations 2017/8 we will be ScaVenturing nonstop- so bring your family and friends and join in the fun!

Group Scavenger Hunts – Can be booked ALL YEAR ROUND on any of our routes at your convenience (book early to avoid disappointment). These are usually ideal for 10 or more participants.

If you’re celebrating a Bar or Bat Mitzvah in Israel, be in touch to hear about our Bar/Bat Mitzvah programs and BM ScaVentures!

For more info and to make a booking for winter scaventures be in touch via our website! 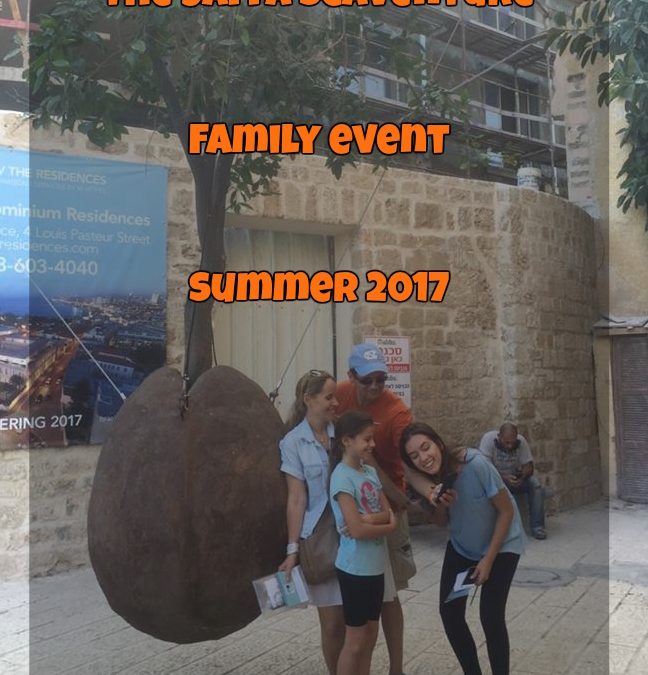 * What is the connection between Noah and the port of Jaffa?  * What happened to Napolean’s soldiers in Jaffa?  *Where can you see the remains of a battle of a mythic princess and a sea monster?  * All this and more to be answered on the Jaffa ScaVenture summer 2017 event! *

Navigate the route before time runs out – at the same time learn the story of Jaffa, its people, places and events. This will be an unforgettable family experience!

THIS YEAR THERE ARE LIMITED SPACES ONLY – SIGN UP NOW TO AVOID DISAPPOINTMENT!